One major attraction in New Orleans is the Aquarium of the Americas. It’s got sharks, jellyfish, and all kinds of other fish. There’s also a section that has parrots, an alligator and turtles.
This is a lionfish that was at the aquarium. 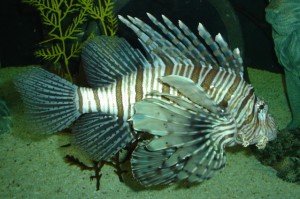 Here is one of the seadragons, there were several of these swimming round in one of the tanks. There were also some ‘leafy seadragons’ which were very strange looking things much like the one below but it had some small leaf-like bits to help camouflage it. 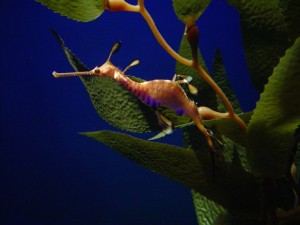 Right next door is an IMAX theatre showing fishy movies – Sharks, Ocean wonderland, Volcanoes of the deep sea and Into the deep. They’re in 3D and the 3D effect is really neat. Fish swimming out of the screen towards you, quite a few of the kids in the audience were being a bit silly and reaching out trying to grab them.